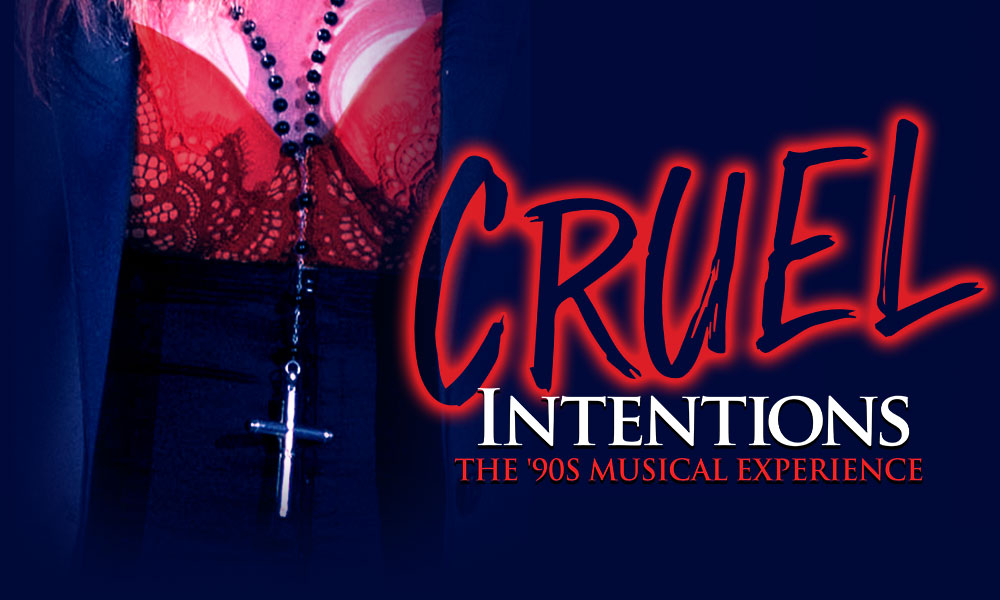 LAUREN ZAKRIN IS READY TO SHOW YOU HER DARK SIDE.

Fresh off playing the titular character’s understudy in Broadway’s Natasha, Pierre and the Great Comet of 1812, the Michigan-raised actress’ newest project is taking her deep into a corrupt world of secrets, seduction, and deception. As the dangerous and manipulative Kathryn Merteuil in Cruel Intentions: The Musical, Zakrin is transforming from an ingénue to a villain.

After two sold out runs in Los Angeles, Cruel Intentions: The Musical has arrived in New York City for a limited engagement (through February 19, 2018). Opening December 11th, the show is based on the 1999 cult-classic motion picture of the same name. Created by Jordan Ross, Lindsey Rosin and the film’s director, Roger Kumble, this stage adaptation features a compilation of throwback hits, including some of the best-known tracks from the movie’s legendary soundtrack – including Counting Crows’ “Colorblind” and The Verve’s “Bittersweet Symphony.”

I spoke with Zakrin about getting to be a “bad guy” for the first time, her connection to the show’s source material, performing some of the biggest songs of the ‘90s, her musical theater dream roles, and more.

ALEX NAGORSKI: Growing up, were you a fan of the movie? What’s your first or favorite memory about the effect it had on you?

LAUREN ZAKRIN: I was absolutely a fan! And I hate to admit it, but I was on Team Kathryn. I don’t know what it says about me as a person, but the darkness and the power of her character fascinated me. I think I might have been a little young for it, so the movie felt like this dirty little secret that I hadn’t quite figured out yet.

Aside from the movie itself, where/who else are you drawing inspiration from to shape your interpretation of Kathryn?

I think it would be easy to point the finger and say that I am drawing inspiration from girls who were unkind to me in high school, and of course I do. But it’s much more juicy to find the Kathryn that already lives within me. Even if she has never come out before, I think we all have a little Kathryn Merteuil inside, whether or not we would like to admit it.

Have you had an opportunity to meet and/or speak with Sarah Michelle Gellar (who played Kathryn in the film) about this role?

Unfortunately, I have not met Queen SMG. However, I have heard that she attended the show while it was running in LA! Everyone says she was lovely, and very supportive. If I do get to meet her, my inner Buffy-obsessed pre-teen self will probably freak out.

Kathryn and her stepbrother Sebastian have – to put it mildly – quite an unconventional relationship. How have you and your co-star Constantine Rousouli found the balance between passion and revenge that these two characters force one another to endure?

Constantine and I were fortunate enough to walk into the process already knowing each other. Nine years ago, we toured together in Legally Blonde, my very first job! It has been helpful to have a bit of history and trust in the bag when diving into a relationship as complicated as Kathryn and Sebastian’s. Everything else between our characters just seems to be falling into place. There is a natural flirtation and playfulness between us. We know how to poke fun at each other. And we also know when the other one needs support. Constantine has also already been on the Cruel Intentions ride for a couple of years now, and it’s been wonderful to have him holding my hand and guiding me through the world! It doesn’t hurt that he is devilishly handsome, either.

As an actor, how does getting to play a villain differ from some of your previous characters in musicals such as Wicked and Grease?

Kathryn is my very first villain, my first “mean girl.”  In the beginning, I was intimidated by her darkness, but now … I LOVE IT. I find it very therapeutic to expose all of the facets of her to an audience.

The film was based on the novel Dangerous Liaisons (which was also turned into a movie). What do you think it is about this story that has allowed it to live on in so many incarnations and mediums?

Everyone is capable of darkness. I think telling a story that exposes the ugliness of human nature, the selfishness, the jealously, the desire and the cruelty not only forces us to address the unkindnesses in the world around us and why they are happening, but to also acknowledge our own thoughts and actions. It forces us to address our own capabilities towards good and evil. Everyone has dirty little secrets and fantasies, and perhaps everyone has done a thing or two that they aren’t proud of … but pretending otherwise isn’t helpful, nor is slapping a quick label on it. We must address it and examine it, and find the why. I think these stories allow us to take the look that we might be too afraid to do on our own.

The musical is filled with some of the biggest hits of the 90’s – including songs by artists like Britney Spears, No Doubt, R.E.M., Christina Aguilera and Jewel. As a performer, how do you go about re-contextualizing these iconic songs within a musical theater narrative?

As a performer, you must strive to make each song as story driven as possible. Of course, when these songs drop in the show, the audience loves it. There is a lot of laughter and hooting and singing along, which is exactly how it should be. But as the storytellers, we have to try to resist falling into the trap of the joke. The song’s nostalgia is the joke, but the performance of it is not. That’s the only way to maintain the integrity of the story itself, while weaving in these fun 90’s hits.

The show takes place at renowned downtown Manhattan venue (le) Poisson Rouge, complete with bar and table service. How does performing in this type of nightlife environment contrast from being on stage in a more traditional theater?

After doing The Great Comet of 1812 in a tent in the Meatpacking District, I have found that I really thrive in a more interactive environment. I think we have this wonderful opportunity to push the boundaries and change the shape of how theater can be done or seen. Cruel Intentions is meant to be a dirty, wicked little party, so it fits perfectly into Le Poisson Rouge’s rock-and-roll world. It’s the perfect place to have a drink in your hand and be singing along to Ace of Base.

You made your Broadway debut in 2014 as Sherrie in Rock of Ages, a musical about the 1980s. Now that Cruel Intentions has taken you to the following decade, do you have more fun reliving and exploring the ‘80s or ‘90s through your work?

I was a child of the 90s, so revisiting them still brings me a little bit of shame when I have to look at some of my fashion and music choices. Doing something like Rock of Ages really let me feel like I was diving into another world that I got to learn about and explore.

You’ve been very vocal on social media about the absurdity, cruelty and chaos that defines our current presidential administration. Is it your hope that stepping into the nostalgia-tinged 90’s world of this immersive musical experience will provide audience members with a temporary pass for true escapism? Or are there larger lessons/takeaways that you’re hoping the audience leaves with?

I think we absolutely have an opportunity to comment on the current climate, and to point at things that may or may not have changed socially and politically. There are moments for escapism, but it is always a shame when the opportunity is missed to create change.  As I mentioned, I hope this story, at the very least, allows people to honestly observe, address, and examine the unkindnesses and cruelties within them and in the world around them.

I was fortunate enough to catch your phenomenal turn as Natasha in Natasha, Pierre, and the Great Comet of 1812 this past summer opposite Oak Onaodowan and Ingrid Michaelson. What were your thoughts/feelings on the show’s abrupt and controversial closing?

Thank you for your kind words! All I can say is that Natasha, Pierre, and the Great Comet of 1812 has been the most rewarding and beautiful experience of my professional life, and I miss it every day!

In addition to Cruel Intentions, you’ve been a part of several other movie-to-musical adaptations – including Legally Blonde, Catch Me If You Can, and Flashdance. In your experience, what are both the most rewarding and challenging aspects of bringing such beloved films to life on stage?

It is always helpful to begin a project that already has a built-in fan base. However, there can be some challenges in navigating how to maintain the things that people love about the movie while keeping the stage adaptation fresh and relevant. While we want to stay true to all of the iconic moments people are dying to see, it is important to know when change is necessary to best tell the story today. It is also important to avoid the trap of replicating or imitating a performance. The characters need to remain truthful in our bodies, and our interpretations of them grounded in honesty.

What is your musical theater dream role?

Natasha in The Great Comet of 1812. Christine in Phantom of the Opera. Clara in The Light in the Piazza. Marilyn Monroe. Or better yet, something new and all my own!